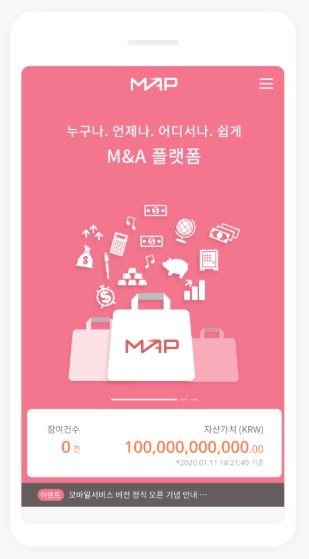 GBC Korea is accelerating the operation of the project since the launch of the mobile application of the global M&A platform G-map.

GBC Korea’s “GMAP” is an M&A platform service designed to allow anyone, regardless of country, race or religion, to participate in M&A (SI, FI) transactions anytime, anywhere with a single click. With the recent launch of the multi-language version, it has drawn attention from existing Japanese investors as well as investors from around the world, including British and American investors and Chinese investors.

According to GBC Korea on the 11th, GMAP mobile application has been deeply reviewed for numerous target companies along with many concerns at the time of operation of the project due to the covid19 and others.

An official from the company said, “With the release of the mobile version, we are now fully prepared to operate the project at a time when we can participate in M&A (SI, FI) with small amounts at anytime and anywhere,” and added, “We are making all-out efforts on the project that will be in operation soon.”

It is currently compressed into four out of 20 projects, and when the final project is decided, it will be published after the disclosure. The management explained that the ban on the use of undisclosed information and the part linked to stocks are being carried out in strict secrecy for internal employees.

In the future, “GMAP” members will be provided with services that will make it easier and more convenient to participate in projects through mobile devices, and that will allow selling companies to check them in real time.

Holders who have been waiting for the project to be put on hold have high expectations for the release of this mobile version. Therefore, attention is being paid to whether the current sluggish market atmosphere can reverse.

A GBC official said, “Since covid19, the government has been pursuing the Korean New Deal policy and is planning to foster non-face-to-face industries and organize digital infrastructure. By taking advantage of these government policies, GBC has opened its online platform in a timely manner,” and added, “It is significant in that it has set the stage for a leap forward not only in Korea but also around the world in the future.” “The unexpected covid19 has also increased market volatility, but we expect passive funds to be activated at a time when covid19 calms down again,” he added. “At this point, M&A transactions through GMAP platforms will increase the efficiency of passive funds as an alternative to efficient market conditions.”

So far, M&A has been exclusive to institutional investors, but “GMAP” will allow ordinary investors to take part in the M&A.

In particular, attention is being paid to whether the so-called “Dong Hak Ant Movement ,” which has been blowing into the stock market since the covid19 incident, will also blow up in the M&A market through the launch of the mobile application “GMAP.”